For the last couple of years I’ve been searching for the perfect zig-zag sewing machine that can be treadled. I haven’t found one that meets all of my requirements, but I’ve found several that come close. My Singer 328K is all metal, it makes most of the stitches I need, and it is easy to treadle, but it skips stitches on stretchy knit fabrics. My Janome 712T does well on knit fabrics but is hard to treadle and has plastic parts that I worry about breaking when I sew thick fabric. I found a Fleetwood F-5000 free-arm machine that I was able to convert to treadle. It is all-metal, handles knits well, and is easy to treadle, but only does straight stitch and zig-zag. Also I prefer to sew on a flat bed machine most of the time.

In the back of my mind I kept wanting a Singer 411G. I knew it wouldn’t be quite what I wanted, since it doesn’t do a 3-step zig-zag (it’s multi zig-zag stitch is 4-step), and it is almost impossible to find one with a treadle balance wheel. However, I know some people have managed to treadle the electric version by shimming out the balance wheel, using a string or spinning wheel drive band instead of a leather belt, or cutting a groove in the balance wheel, so I figured that with some effort I should be able to treadle the electric version. And as for the 3-step zig-zag, I think I can design a new cam and have it 3D printed [which I did].

I finally decided to just stop buying fabric for a while so I could save up for a 411G. They are fairly rare, especially in the US where they were never sold, so I had to buy one on ebay, which I hate doing. It survived being shipped, but some idiot (probably the seller, who claims to be an expert at servicing sewing machines) had squirted massive amounts of grease in most of the places that should be lubricated with sewing machine oil. That took a while to clean up.

I kept getting irritated because the “nearly perfect condition” machine I paid too much for was a greasy mess, the tension assembly needed fixing, it was missing a screw, one spool pin was broken off, the other spool pin was stuck in place with epoxy, and the motor needed servicing. Then I would remind myself that those were the reasons I swore off buying sewing machines on ebay. Right, right.

At least the only shipping damage was the broken off spool pin. Although I can’t really count that as shipping damage, since the plastic pin was superglued in place and would have broken the first time I used it anyway. Unfortunately, I couldn’t find a 411G locally, so ebay was my only option.

My 411G is the electric only version:

There is a version of the 411G that was made to convert between treadle and electric. Maybe one day I’ll find one. There is a groove for a regular leather treadle belt on the balance wheel. It has a belt cover on the front and a different type of clutch knob on the handwheel [Note that part of the clutch knob is missing on the handwheel below—see the image in the comments section for what a complete one looks like]:

I tested out my machine on some cotton/spandex fabric that my Singer 328K,  Singer 401A, and other vintage sewing machines had a hard time with. The 411G did great on this fabric. Yay! It seems to work better on tricky knits with Singer size 90/14 ball point needles, though. I also tried Schmetz stretch needles and Organ ball point needles, but I got a few skipped stitches. I can live with having to buy Singer ball point needles for this machine. Organ universal needles work fine in this machine for sewing woven fabrics, which is good, since they are cheap and I have a lot of them.

Another reason I wanted a 411G is that it chain stitches (if you have the chain stitch needle plate, part #503599). I have a Singer 604E that I got for chain stitching, but it doesn’t produce a very consistent stitch. The 411G’s chain stitch is a bit better, but I’m still getting the occasional giant thread loop or broken thread. Maybe I can get it to work more consistently if I play with the tension and stitch length. 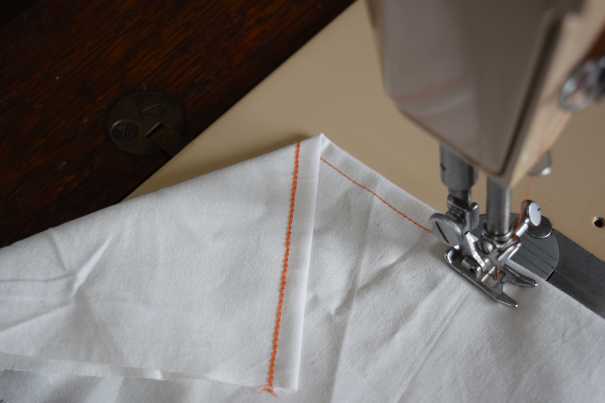 I decided to clean and lubricate the motor, just to see if I might be OK using it as an electric sewing machine (directions for cleaning a Singer slant needle motor can be found on this page). I also cleaned the motor commutator with a pencil eraser. I put the motor back in, and it sounded better and might have had a little more power. For a vintage machine, it’s pretty nice. It was a top of the line machine in it’s day. I still couldn’t handle sewing on an electric machine, though. It’s too loud, it’s too hard to control the speed, it’s hard to push the button on the foot controller, and it makes that annoying electrical humming noise when it gets stuck on a thick seam. So I promptly took the motor back out.

First I had to take out the metal plate on the right side of the opening for the sewing machine. It is attached to a giant spring, which also had to come out. With a mirror and a light, I was able to see the screws I needed to remove.

I’m not sure I would be able to put that spring back in. It was under a lot of tension, and I’m not sure how it all fits together. Here are the parts I took out:

I tried putting my 411G in place, but the ledge on the front sticks out too far and hits the machine: 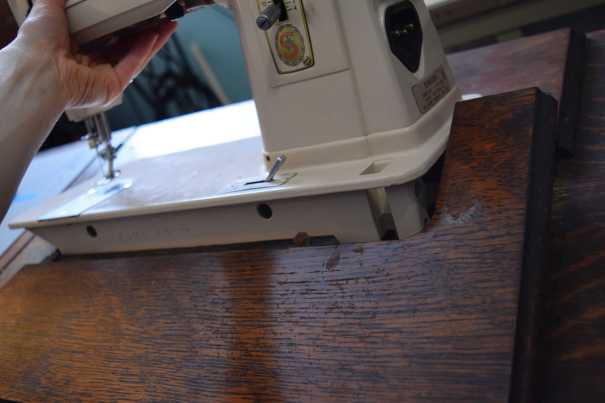 I sawed off 4 mm from the edge of the front piece of wood.

Now the machine fit into the opening, but I discovered I couldn’t lower it completely to shut the cabinet!

I couldn’t fix that, so I just put a plastic cover over the sewing machine and tip up the left side of the table against it when I’m not using it. I can’t leave the cabinet open all the way since it sticks out into the middle of the room and gets in the way.

I had several options lined up to try – candle wick, my spare urethane spinning wheel belt, and flat urethane belting. There is a piece of 3/16″ leather treadle belt in the picture below for reference. I decided to try the flat belt first, and it worked so well I didn’t try the other options. 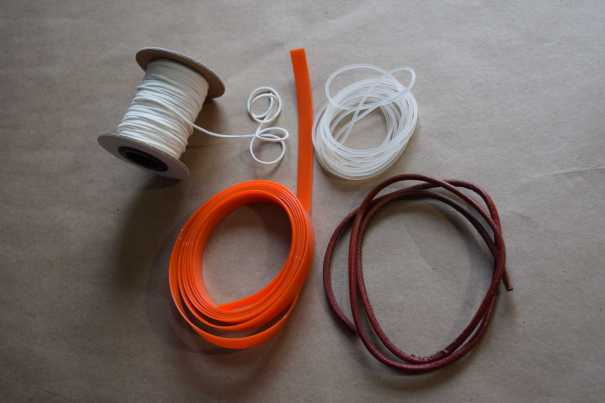 I cut the belt lengthwise into 7 mm and 6 mm wide strips. I used the 7 mm wide strip. I joined the belt by melting the ends near a candle flame then pressing them together. After it cooled I cut off the bead at the join with a razor knife. After practicing a couple of times, it’s not hard to do.

The flat belt works pretty well. It doesn’t slip at all, even when I sew over thick seams. Most of the time it rides at an angle on the drive wheel:

Sometimes the belt works its way part way over the edge of the drive wheel, and it looks like it is going to pop off, although it hasn’t actually come off yet. I shortened the belt a little to see if more tension would help, but it didn’t make any difference. [Edit: Actually, shortening the belt did help. The belt has been staying on the drive wheel.] It sews fine, though, and if I notice the belt working its way over the edge, I just give it a little nudge to get it back in place.

I really like that the urethane belt never slips, even on the thickest fabrics, so even though I have to nudge it sometimes, I’m happy with the flat belt. Cutting the belt narrower, maybe 5 mm wide, would probably help keep it on the drive wheel, but I was worried a narrower belt would stretch out too much or get wedged into the notch on left side of the balance wheel. I do have that other piece of belting I could try cutting narrower if the belt does ever start coming completely off the drive wheel.

I don’t like that the spool pins are on top of the upper cover. You have to open the cover to see the stitch pattern chart, which is hard to do without knocking off the spool of thread. Since the one remaining spool pin is too short anyway, I decided to use a separate thread stand.

This Superior Threads stand is pretty cute, but considering how much I just spent on this machine, I decided I’d better just make my own thread stand for now. I made one from an old yardstick, a skewer, an old plastic food container, half of an old knitting needle, a bag of sand, a pair of nuts and bolts, and some tape. Not very pretty, but effective.

I like the mismatched drawer pulls on my treadle cabinet. Kind of shabby chic, or in my case, just shabby. Maybe I’ll replace those when I get around to refinishing the cabinet.

I’m really hoping I can manage to stop buying sewing machines now. My fleet of sewing machines is feeling pretty complete. I have six treadle machines, which are the machines that I actually use (The electric machines sit on a shelf. Or on the floor. Or up in the storage loft). My Singer 201-3 is my most frequently used straight stitch machine. I have my Singer 15-88 set up for jeans topstitching thread. I probably won’t use my Singer 328K much now that I have the 411G, but my kids use it sometimes. I have a Fleetwood F-5000 free arm machine that I mostly use for hemming jeans. My Janome 712T only gets used for sewing bras and underwear, but if I can get the 3-step zig-zag special stitch disc made for the 411G, I probably won’t use the Janome much.

In addition to the treadle machines, I have a Juki MO-654DE serger, which I really like, and a Brother 2340CV coverstitch machine. I also have a portable electric walking foot machine that will sew material up to 3/8″ thick. So I’m all set to sew just about anything from lightweight silk to a teepee. I can stop now. I don’t need any more sewing machines. This time I really mean it. Seriously. Well, except maybe if I find a treadle version of the 411G . . .