Chainstitching on a Touch & Sew

While I was researching my Singer 401A sewing machine, I discovered that there are vintage sewing machines made in the 1960’s and 1970’s that will sew a single thread chainstitch with the right attachments. I immediately decided I had to have one, since I don’t have a serger or cover stitch machine that sews chainstitches, and I hate picking out basting stitches.

After doing some more research (which I will detail at the end of this post since I want to clear up some misinformation I found) I decided to buy a Singer 604E Touch & Sew. Unlike most of the 600 series Touch & Sews, this is a straight stitch only machine. I decided on this one because there is less to go wrong with a straight stitch machine and I wanted to leave it set up for chainstitching, so I wouldn’t be using the other stitches anyway. 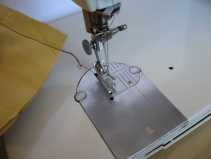 Here are some ways you can use chain stitches, which quickly unravel when you pull on the thread at the end:

I am having so much fun sewing basting stitches. Pulling out a seam in less than a second hasn’t lost its novelty yet. I’m like a kid playing with my new toy – sometimes I’ll sew a seam on a scrap of fabric just so I can pull it out!

P.S. I thought I’d throw in this basting tip – if you don’t have a chainstitch machine, try using wash-away basting thread for easy basting stitch removal.

The rest of this post is about the research I did on vintage chainstitch machines, which will probably only interest you if you are looking to buy one.

I very briefly considered getting a toy machine that chainstitches, but they usually don’t work, and for sure won’t work on thick fabric. Just go check out all the one star reviews on Amazon. I have memories of being frustrated with my toy sewing machine as a kid – I think maybe I got it to work once or twice for a few stitches. I looked at industrial chainstitch machines, and even simple vintage ones are at least as expensive as a cover stitch machine. Antique chainstitch machines are pretty, but they are expensive, may or may not work, and many of them use needles that are no longer manufactured.

As I was researching my Singer 401A, I read a lot of forum posts about vintage sewing machines, and I was excited to discover that there are some sewing machines made in the 1960’s and 1970’s that can chain stitch with a few simple attachments. Some of these machines are the Singer 600 series Touch and Sew machines (the 700 series Touch and Sews chainstitch too, but they all have plastic gears, so I would avoid those). The Singer 411G and 431G can chain stitch. Some Kenmore machines (many in the 158 series and some others) can also chain stitch with the right attachments. See this blog post and this thread for more info on Kenmores. Note that the Kenmore chainstitch attachments look completely different than the Singer chainstitching attachments.

I had a hard time doing research on these sewing machines. I found lots of conflicting information on blogs and forums, so I’m collecting what I learned here in one place, hopefully minus most of the mis-information other people have spread around the internet. I didn’t find as much information on Kenmore sewing machines, and I ended up buying a Singer, since the machines and attachments were less expensive and easier for me to find. The vintage Kenmores are good sewing machines, and they kept using metal gears even after Singer switched to plastic gears sometime in 1966, so if you can find one, don’t overlook a Kenmore as an option for chain stitching even though all of what I discuss below is about Singers. You might have trouble finding the right attachments to go with a particular Kenmore machine, so I’d suggest if you’re going to buy one, try to get one that comes with the chain stitch attachments.

Just to clarify, not all Singer sewing machines with model numbers in the 600’s are Touch & Sews, and not all Touch & Sews have model numbers in the 600’s. “Touch & Sew” machines have wind-in-place bobbins. The Touch & Sew machines I’m going to talk about are “600 series Touch & Sews” manufactured in the 1960’s. The 700 series Touch & Sews all have plastic gears, and as old as these machines are, if those gears haven’t broken yet, they will fail soon since the plastic is at the end of its expected lifespan. Singer has also re-used the name “Touch & Sew” for some modern sewing machines. Those are something completely different and I’m not discussing those at all.

All Singer 600 series Touch & Sew machines can chain stitch with the right attachments, despite what you might find on the internet leading you to believe otherwise.

The earliest models in the Touch & Sew series for sure had metal gears. These are the 600, 600E, 603, 603E, 604, and 604E. You sometimes find metal gears in later model numbers, like the 620 series models, but you’ll have to unscrew the bottom cover and look inside to find out if the gears are metal or plastic. I’m going to ignore any other Touch & Sew models, because . . . old plastic gears.

I wanted a machine to leave set up for chain stitching, so I chose the 604E, since as a straight stitch machine it has fewer parts to to break, it for sure has metal gears, and I happened to find one on ebay at a low price. I found a free Singer pdf manual for the 604, but not the 604E, so I also downloaded the 600E manual for the updated bobbin winding instructions. I found the 600 series chain stitching guide on the TNT repair website. TNT Repair is a good source for repair information and parts for many vintage Singer machines. The Singer 24 manual has additional tips for sewing with single thread chain stitches.

Here’s what the 600 series Touch & Sew chain stitch attachments look like. You might find them for sale mis-labeled or in with other attachments, so it helps to know what you’re looking for.

17 comments on “Chainstitching on a Touch & Sew”