My mother sent me her favorite bra that she wanted me to try to clone. She completely wore it out, and of course these bras aren’t made any more.

I guess you’d call this a lounge bra – I don’t think it’s supportive enough to be considered a sports bra. There are two layers to the cup. The outer cup is partially molded but also has gathers at the front and sides. 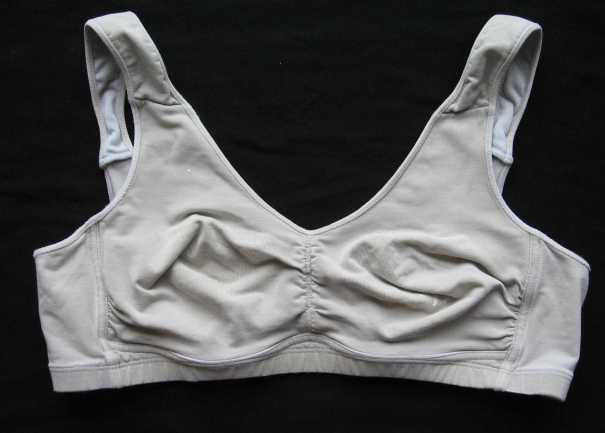 The cup lining is completely molded to shape with no seams.

I spent a lot of time staring at this bra and scratching my head, but I finally figured out how to make a pattern from it.

For the front cups, I marked a grainline down the center, then drew lines 3/4″ away from the gathers at the front and sides. 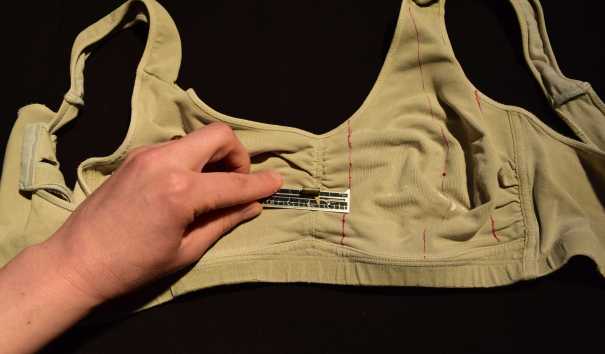 I taped over the cup with a combination of clear box sealing tape and masking tape.  I taped just up to the lines marked along the front and sides.

After carefully peeling off the tape, I added 3/4″ to the front and side edges. I cut the tape where the gathers will be to allow it to lie flat, stuck it on a piece of paper, and traced the pattern.

For the cup lining, I folded the bra where I wanted to make a seam, then marked the fold line.

I used clear tape to make patterns for the upper and lower cup lining pieces.

Here are the cup lining pieces stuck onto paper, along with the front band attached to the lower cup. 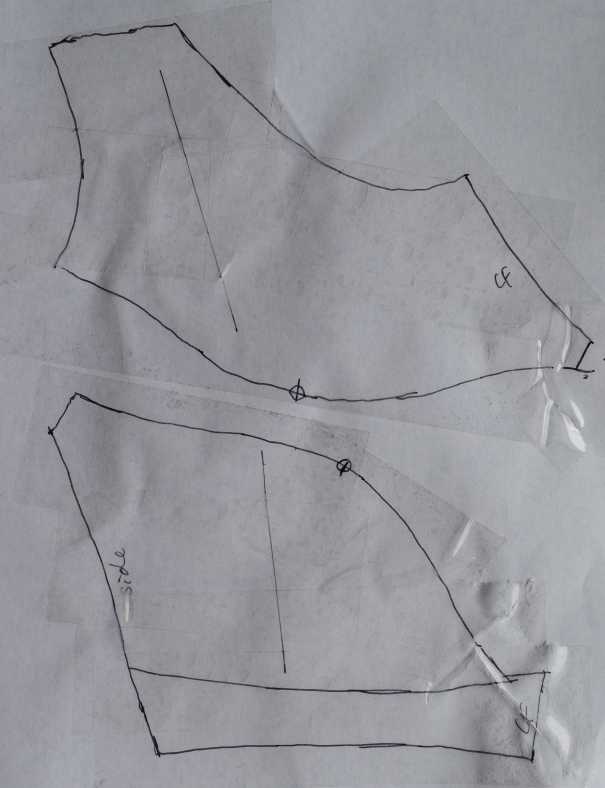 After trueing up the pattern, I sewed up a test bra. I was a bit worried about trying to fit a bra long distance, but although our cup sizes are different, my mother and I have the same band size, so I was able to put on the bra and judge the fit on myself to some degree.

The first bra was too tight around the rib cage and the straps were too short. I made the mistake of stabilizing the front of the band with knit interfacing and using regular 3/4″ knit elastic for the band. I thought 3/4″ bra band elastic would also be too firm, so for the second bra I used some gentle stretch elastic I had in my stash. It was pretty thin and wimpy, so I used two layers to get a firm enough stretch and skipped interfacing the front band.

Amazingly, my mother was happy with bra #2! I think the best I’ve ever done when making a bra for myself is getting something wearable on the third try.

My mother has sensitive skin, so all seamlines are enclosed. The elastic is either enclosed or on the outside.

One comment on “Adventures in Bra-making Part 1: Lounge Bra”