Several people have asked me if my half-scale paper dress form pattern can be enlarged to make a full scale dress form, and I wasn’t sure how well that would work, so I decided to try it. 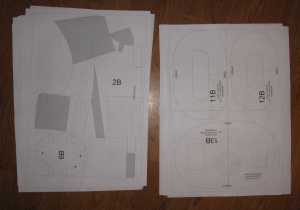 I re-made the pdf patterns at twice the size so I could print them on 8 1/2″ x 11″ paper. It came out to 56 pages. Yikes. But each original pattern piece fit on a single piece of paper, so I only had to tape together 4 sheets at a time, which wasn’t that bad. If you’ve bought the paper dress form pattern on Craftsy or Etsy, I will send you the full-scale pattern if you ask me for it. I also have available a pdf that will print on three sheets on a large format printer (copy shop version) in addition to the 56 page version.

I glued each pattern piece onto poster board, using a total of 5 sheets of poster board. I had some problems. Poster board is about the right thickness for this project, but it is made from layers of different types of paper, and it wrinkles when it gets wet. I should have used spray glue, but I didn’t want to deal with the fumes, so I used home-made cornstarch paste (without the vinegar), which really adds a lot of moisture.

I tried to fix the wrinkling problem by ironing the poster board pieces dry. This worked pretty well, except blisters developed between the layers that make up the poster board. I had to pop the blisters with a pin and try to iron them flat. At this point, I really didn’t want to re-print all those pages and tape them together again, so I decided to forge ahead.

It went together fairly well after that. I stuffed the form with crumpled paper to help it keep its shape, and I put a couple of small bags of sand in the bottom to keep it from being top heavy. After it was assembled, I covered it with a layer of gummed kraft paper tape rather than paper mache, because paper tape holds less moisture and I was still having problems with the poster board warping when it got wet. I was running low on paper tape, so after that I switched to paper mache, using butcher paper and cornstarch paper mache paste, since I’m gluten intolerant.

I wish I’d thought to cover the form with plastic box sealing tape before adding layers of kraft paper tape or paper mache. That would have kept most of the moisture out of the poster board. Why do I get all of these good ideas after the project is done?

After the paper mache was dry, I sprayed acrylic sealer on the form to preserve it.

It took me a weekend to assemble the dress form, then countless hours over several days to add layers of paper mache. Seriously, I refuse to count how many hours I spent putting paper mache on this thing.

So yes, it is possible to use this pattern to make a full scale dress form. It would work fine as a display item, but it doesn’t quite have a realistic body shape, so I wouldn’t recommend using it for fitting purposes unless you pad it out to match your own body shape.