The Jeans That Killed My Sewing Machine

I had said before that you don’t need an industrial sewing machine to sew jeans. Well, that is only true up to a point. My Singer Fashion Mate 252 did fine on 12 ounce denim and just barely made it through 13.5 ounce denim as long as I hammered all of the bulky spots first and used double topstitched seams rather than flat-felled seams.
But . . .

I had one last piece of denim in my stash I wanted to make into jeans. I’m not sure of the fabric weight, but I think it is 12 oz or less. It’s non-stretch denim, and it’s loosely woven, so I was worried about the jeans stretching out too much as I wore them. I decided to underline the jeans with an especially horrendous piece of quilting cotton from my stash (no, I didn’t buy that fabric- it was given to me as part of a bin of fabric from an estate sale). I didn’t give any thought to how my sewing machine would handle the extra layers of fabric. (The jeans ended up uncomfortably tight, so this was an all-around bad idea.)

Everything was going OK until I was topstitching the inseam and got to the thick spot at the crotch where the seams come together. Then clunk, I heard the sewing machine needle hit metal. I thought maybe I’d bent the needle, but no, it was straight. I cut the thread, removed the fabric, and checked out what was going on. The needle was hitting the shuttle race every time it went down. I thought, oops, I must have thrown out my timing on the thick fabric – no big deal, I can fix that.

As I was looking at the bottom of the machine and turning the hand wheel, suddenly the wheel started turning way too easily, and I realized something was broken. It turned out to be a broken plastic gear up in the top, and I think the machine would have to be mostly disassembled to replace it. Everything else important is made of metal, but they just had to put in a plastic gear in an inaccessible location.

This sewing machine had been making some screechy noises for a while, so I think it was already on its way to breaking, and the jeans were just the last straw. So, that was the end of that machine 😥

I tried finishing my jeans on my Janome Magnolia 7306. It really doesn’t like thick fabric, wouldn’t make even stitches, and I was afraid I would break this sewing machine, too. I really don’t like sewing on this machine anyway. I am so spoiled from sewing on my treadle-mounted machine I don’t want to sew on anything else – the stitches are even, and it is so easy to control the speed with the treadle. My Singer 252 is an entry-level sewing machine from the early 1970’s, but it sews so much better than my six year old entry-level Janome.

I had a spare Singer 252 for parts, but the tension assembly screw was bent on that one. I pulled it out of storage and managed to straighten the tension assembly enough that it works. Whew. I’m so glad I was able to fix it! After only a few hours without my favorite sewing machine, I realized that a lot of the joy I get from sewing is from using that particular machine. 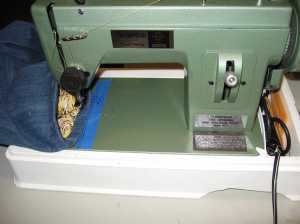 I have a semi-industrial portable walking foot machine that I really should have been sewing these jeans with rather than risking my other machines. I found this machine on Craigslist, and just had to buy it after thinking about all of the times I’ve had trouble sewing through thick fabric. It is hard to sew in a straight line on this machine, the stitches don’t stay an even length, and I can’t use a top-stitching foot with it, so I’d rather not use it if I don’t have to. It will sew through just about anything, though. Well, now I’ve realized how fragile my other machines are, so no more risking them. If I have wobbly top-stitching on my jeans from sewing them on the walking foot machine, so be it. Chances are non-sewers will not notice the imperfections unless I point them out. Heck, they probably won’t even notice that my jeans are home-made.

On a good note, I only had a 60 yard spool of topstitching thread for these jeans, and I was carefully conserving it, hoping I would have enough. I just made it with 2 yards to spare!

4 comments on “The Jeans That Killed My Sewing Machine”