Whoops, I did it again. I bought another vintage sewing machine. This is a Singer 115 with Tiffany decals, made in 1919. I don’t typically name my sewing machines, but I think I’ll call this pretty lady Tiffany. 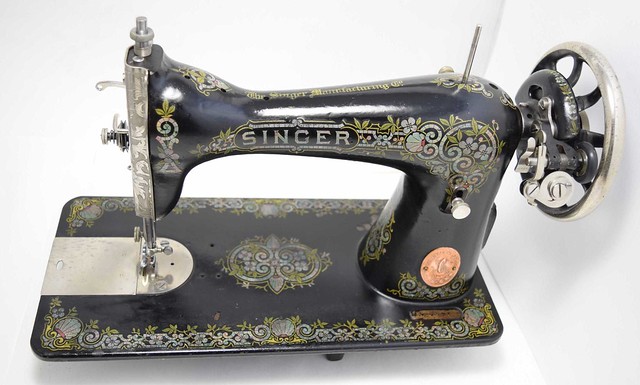 I had made a few rules for myself in an effort to keep my vintage sewing machine addiction somewhat in check:

So how did I justify Tiffany’s purchase? Well, the Singer 115 has a full rotary hook, which means no vibration at high speeds, and I was hoping it would treadle with very little effort (which it does), making it a good machine for quilting. Never mind that I hardly ever sew quilts, and when I do they are usually small and made from large squares. The other reason I bought this machine is that I really like the Tiffany decals. I figured I’d keep this machine out as a decoration even if I couldn’t get it sewing. So, OK, maybe I mostly bought this machine because it’s pretty. I’m allowed at least one machine in that category!

I did the most thorough cleaning and polishing job on this sewing machine that I’ve done yet. I found a series of blog posts about cleaning up a Singer 15-30 that were very helpful. I did all of the cleaning and polishing by hand with the help of Evaporust and metal polish, so it took me a couple of days. This machine deserved it, though.

Here are some before and after photos: 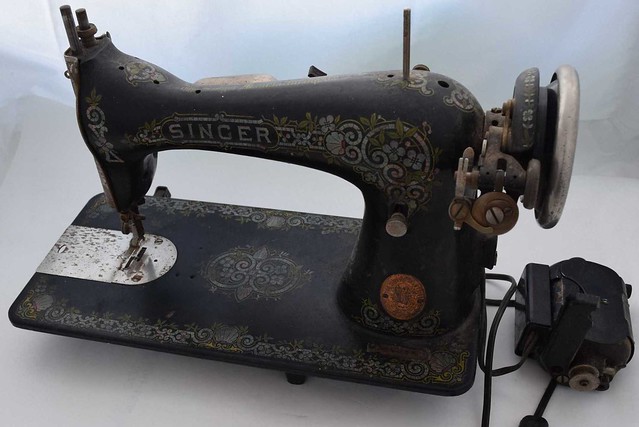 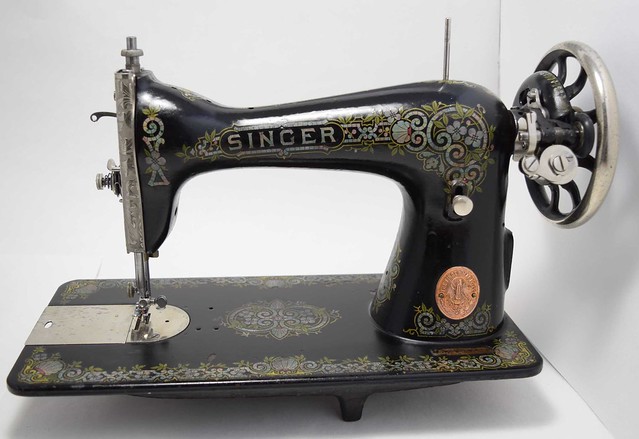 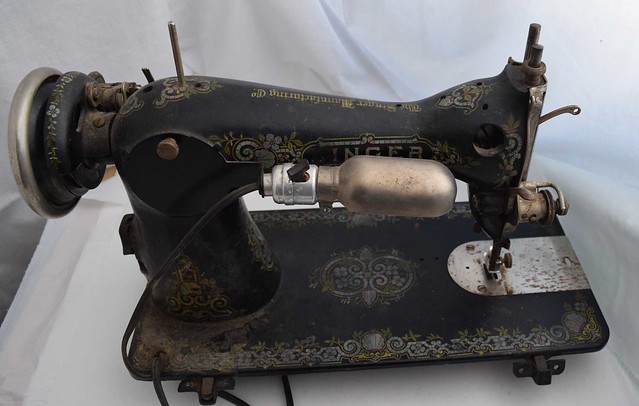 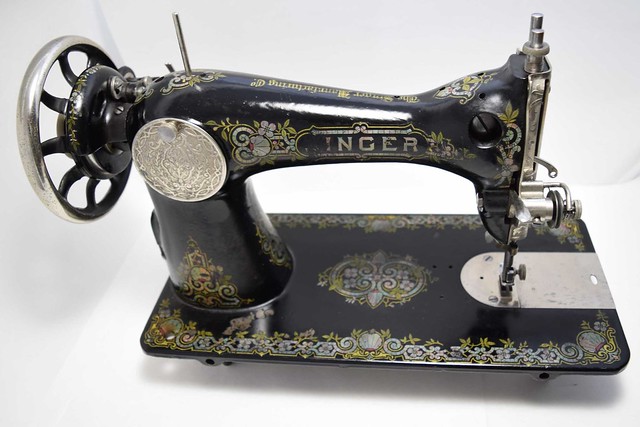 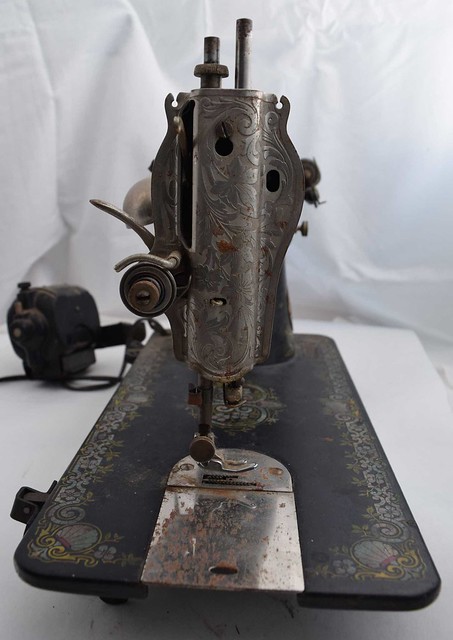 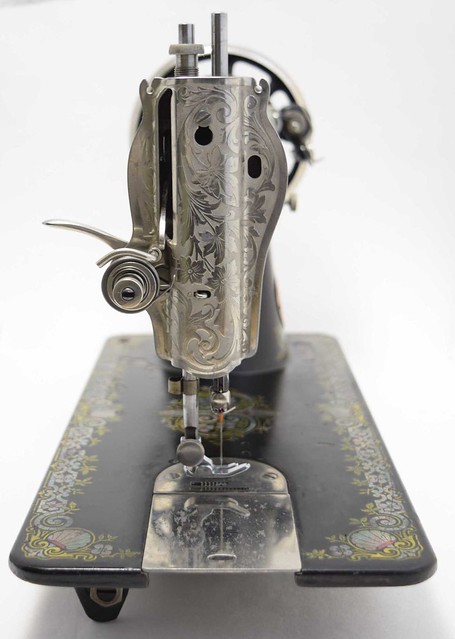 Tiffany was locked up at first, but the problem ended up just being a bit of ancient-looking thread caught in the bobbin area. I’m guessing the previous owner decided their machine was broken, put it in the back of the closet (where it sat for over half a century), and went out to buy a new modern sewing machine with advanced features such as reverse and zig-zag. Ha, and I fixed it in a few minutes just by jiggling the balance wheel until the piece of thread came into view and I could pull it out.

I found a manual for the Singer 115 on ismacs.net. Apparently Singer reused the model number 115, because if you look up 115 in the manual search on the Singer site, you get the manual for a different machine.

The first problem I ran into was that the bobbins would not fit on the bobbin winder. They went onto the shaft OK, but the finger that is supposed to go down inside the bobbin would not fit into it. I think my bobbins have thicker edges than the originals did. I decided to file down the sides of the finger until it fit into a bobbin. This took forever, since I didn’t have the right tools, but I got it to work. I really need to get a Dremel one of these days. 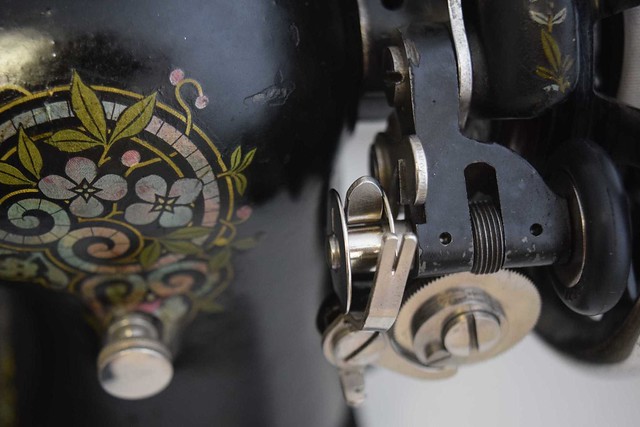 When I started to sew, at first I thought everything was fine, but I kept getting thread snarls every few inches. I watched what was happening in the bobbin area, and the thread was getting caught on the edge of the bobbin case in two places. There were corners there that the thread was getting hung up on, so I used a diamond knife sharpener to file those corners off and smooth out the curves. After that I sanded the area with 1500 grit sandpaper and polished it with metal polish, and I think the area I worked on ended up smoother and shinier than it was originally! 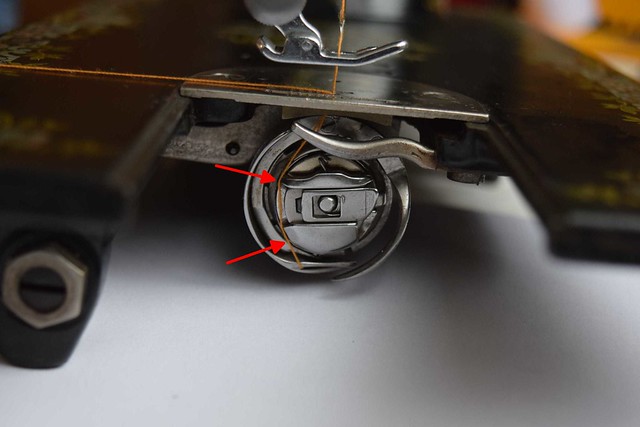 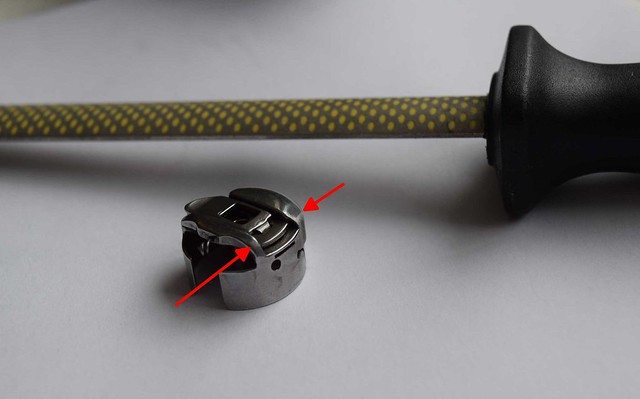 I tried sewing again, and now the thread slipped right around the bobbin case with no problems. I sewed for a bit, and things went well for a while, but then I got another thread snarl. I figured out that the bobbin case was gradually rotating counterclockwise, since there is nothing to hold it stationary. The machine would sew fine until the bobbin case rotated to about an eighth of a turn from horizontal, then the thread would get caught on the bobbin case.

I tried to find pictures of what the original 115 bobbin cases look like. I could only find this blurry picture and this picture of a broken one that show the top of the bobbin case, but it looked to me like the original bobbin cases have some sort of protuberances at 10 o’clock and 2 o’clock to keep the bobbin case from rotating. My bobbin case did not have those, so no wonder it was turning around. There is a stationary piece on the sewing machine that the little bumps sit on either side of.

I thought it would be easy to find some little things to glue onto the bobbin case to keep it from rotating, but I couldn’t find anything around the house that was small enough. I ended up cutting 2.5 mm by 2.5 mm by 1 mm thick pieces of metal from the corners of a hinge. I have a small hack saw, but I don’t have a setup appropriate for working with tiny objects, so this was a bit of a challenge. At one point I dropped one of the tiny pieces on the floor and had to crawl around on the floor for a few minutes to find it. That was fun. I rounded down two adjacent edges on each piece to help keep the thread from getting caught on them, then I glued them onto the bobbin case with JB Weld. 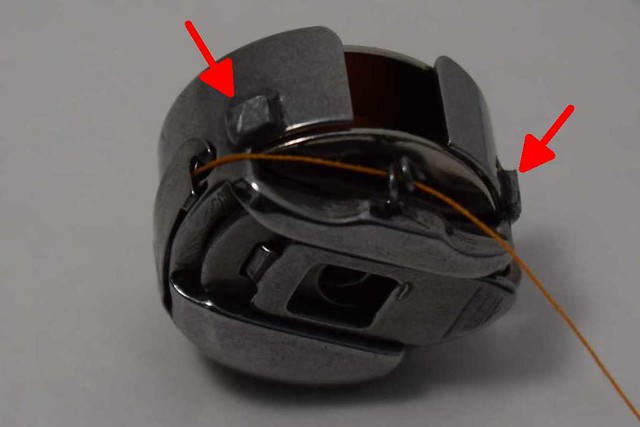 The next day after the epoxy had cured, I tried sewing, and it worked! No more thread snarls! I really hope the JB Weld holds. I’ve been having problems with it on other projects, and I think it might be because I didn’t get the proportions of the two components right or the hardener had separated too much. I have a milligram scale now, so this time I weighed the two components to make sure I got equal amounts. I cleaned the parts with alcohol before I epoxied them together, but I’m not one hundred percent sure I got all of the oil off, which would also cause problems. At least the little tabs aren’t under much stress. 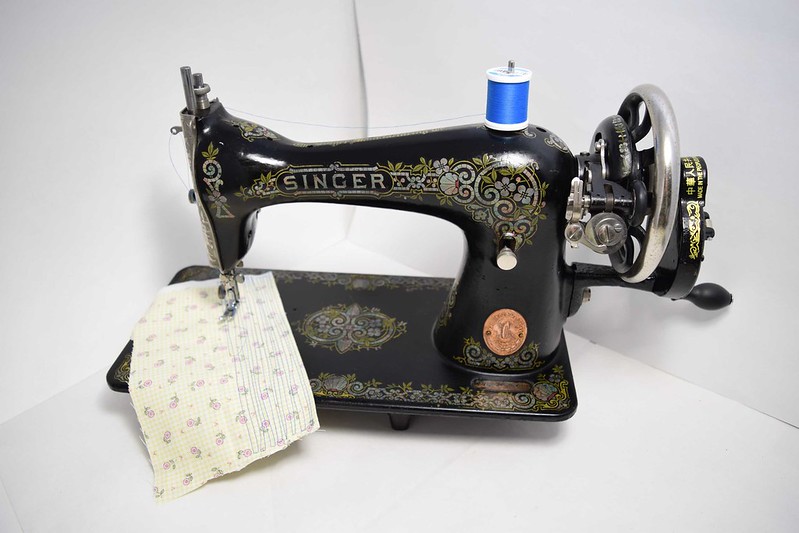 When I was looking for my 115, it took me a while to figure out how to tell the difference between a Singer 115 and the very similar looking and much more common early model 15’s. The simplest way to tell the models apart is to open up the slide plate or look at the underside and see what the bobbin area looks like. There are some side by side pictures of the bobbin areas of a 115 and 15 on this quiltingboard thread.

Here are some tips if you are trying to identify a Singer 15 or 115 from pictures and you don’t have a picture of the underside:

•  The first thing to look for is that the tension assembly is on the left side of the machine. 115’s, 15’s, and 15 clones all have this feature.

•  Model 115’s were never made with reverse. Model 115’s and early model 15’s have a round knob that slides up and down to change the stitch length. If the machine has a stitch length/reverse lever with a round plate around it, it’s a later version of the model 15.

• Look at what type of balance wheel (handwheel) the machine has. If it is solid, that doesn’t tell you anything, but if it is spoked, count the number of spokes. If there are 9 spokes, it could be either a 115 or a 15. If there are 6 spokes, it’s a 15.

•  If the sewing machine is not in a cabinet or case and is sitting on a table, a 115 will sit level. A 15 will be tilted at an angle, with the left side up a little higher.

I couldn’t help taking a lot of pictures of Tiffany, since she’s so pretty. I didn’t want to overload this blog post with them all, so click on over to Flickr if you want to see more pictures.