My take on custom dress forms

My first custom dress forms were made with duct tape many years ago. They weren’t that great and eventually stretched out of shape. Later I learned about paper tape dress forms. I had a couple of those made for me over the years. We used reinforced water activated kraft paper tape, since I figured reinforced tape would be stronger, and I couldn’t find any information on which type of tape to use. Well, it turns out I was wrong. I finally found a reference that says to use non-reinforced tape. I recently used non-reinforced tape to make a dress form for a friend, and it came out much stiffer and stronger. The other benefit to the non-reinforced tape is that the outer surface is not as slippery, so fabric doesn’t slide right off of the dress form. 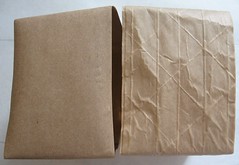 I still want a better custom dress form. My fitting shell that fits me perfectly doesn’t fit quite right on the paper tape form. Of course, part of the reason the dress form isn’t quite right is the kids thought it would be fun to fill it with stuffed animals and jump on it. It mostly popped back into shape, but I think the back of the shoulders still looks a little flat.

I think my ideal form would be a paper mache form made inside a plaster bandage mold. I’ve seen way too many examples of expanding foam busting up the plaster mold to want to try that method. I’m sure it can be done successfully, if you drill holes to allow pressure to escape and add the foam just right, but it sounds like it takes practice to get right, and I don’t want to have to beg someone to wrap me in plaster a second time if something goes wrong. I haven’t done a plaster form because of the expense of the plaster bandages, but if I ever do it, from what I’ve researched it sounds best to make the mold in two pieces rather than cutting it. You do the back building up nice thick straight edges on the sides and shoulders, put petroleum jelly on the edges, and then apply the bandages to the front, overlapping the back a bit. This method avoids damaged edges from cutting, and is safer in case the person needs to get out of the plaster in a hurry.

In my effort to find the ideal cheap custom dress form, I tested out making a paper tape skirt form inside the one made on my body. Maybe someday I’ll try something like this on a dress form.

I also added another tutorial for making seam allowance guides. 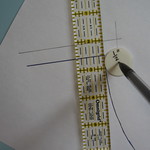