I decided I needed a dry iron – one with no holes in the soleplate – for fusing interfacing and starching.

I had a really hard time finding a dry iron for sale in the US. The only one I could find was the Continental Electric Classic Dry Iron.

Here’s the good, the bad, and the ugly:

There are no holes in the soleplate like I wanted, and when I first plugged it in it heated up quickly. It gets plenty hot – in fact I found myself turning the dial down a notch – but maybe that’s just because I’m used to steam cooling things down? The weight is good, too. Not too light or too heavy. 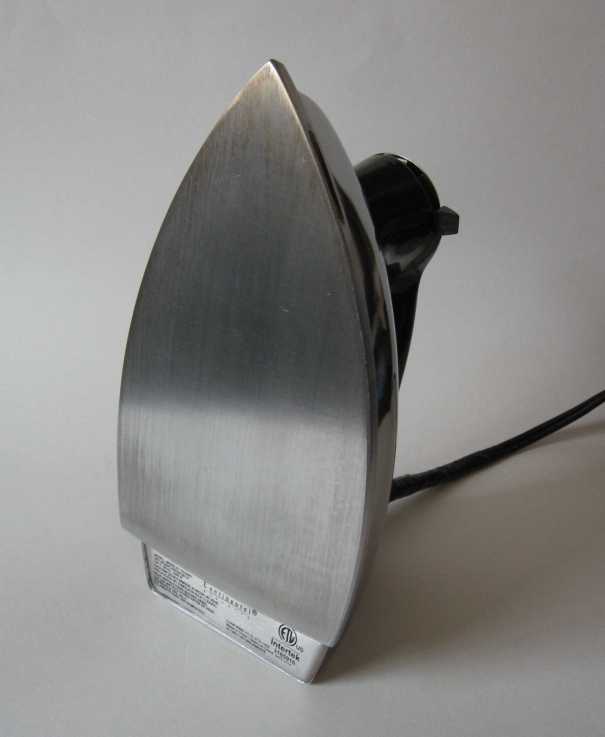 This iron has a significant design flaw. Many reviewers mentioned that the strain relief is too short, and eventually the wires in the cord break. I figured no big deal, since I was forewarned I’d just wrap some electrical tape around the base of the cord to improve the strain relief.

This iron also feels cheap in general. The metal pieces with the labels for the temperature settings are loose and wobbly. The cord is also fairly stiff.

When I opened the box and pulled out my “new” iron, the first thing I noticed was that it wasn’t new. It must have been a customer return that was used quite a bit. It had spray starch residue on the side and brown marks on the soleplate. Also, the cord was bent right at the end of the strain relief.

As I had planned, after plugging in the iron and making sure it worked, I improved the strain relief. The rubber strain relief was too big for the size of the cord, so I stuffed some cut up pieces of zip ties into the hole, then taped around it with electrical tape. I was too lazy to go look for some black tape when I had a roll of bright blue tape handy. I know, it doesn’t look very good, but hey, the lighter color shows up better in the pictures so you can see what I did, right?

At this point I was fairly happy with my iron. Then a few days later I got it out to use a second time, and it wouldn’t heat up. I jiggled the base of the cord, and it heated up for a couple of seconds, then quit again. I considered returning the iron, but at that time it wasn’t available on Amazon anymore, so I decided to try to fix it instead.

I unwrapped all of that tape and unscrewed the back plate on the iron. Sure enough, one of the wire connectors was quite loose. I tightened up that screw, put everything back together, re-wrapped the base of the cord with that lovely blue tape, and plugged it back in. And got nothing. It didn’t heat up at all. Grrr.

I guessed that the problem was broken wires at the bend at the end of the strain relief, so I unwrapped the blue tape again and cut off the cord just past the strain relief. Luckily I had some new crimp-on wire connectors that worked.

I slit open the piece of wire that I had cut off to see if there really was a broken wire, and sure enough, the wires were completely broken. I’m surprised the iron ever worked at all.

This time I actually went and found a roll of black electrical tape to re-do my awesome strain relief fix. Third time’s the charm. 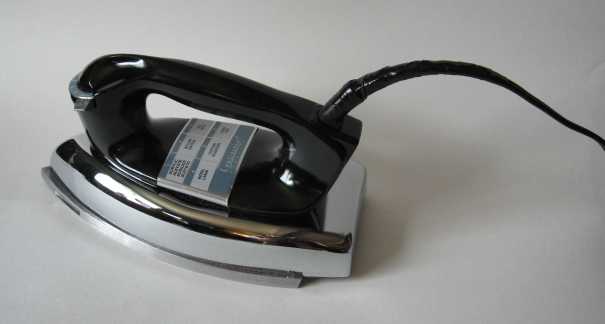 So far it’s working. If I see a vintage dry iron at a thrift store, I’m going to buy it, though. Old wiring makes me nervous, but could it really be any worse than this?